My Last Night in the Woods 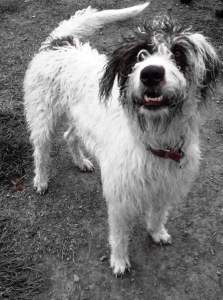 From my writings on Thursday night:

This time tomorrow, I’ll be in my home, hugging my amazing wife who I’ve missed so much this past couple of weeks. I’ll also be petting and laughing at Annie, my very lovable therapy dog (she’s not really a therapy dog, but there have been times that she’s about the only thing that can make laugh, so I call her my super-therapy dog… and now that I think about it, I should probably buy her a cape or something).

Well, this mission into the world of homelessness was way different than I thought it would be. Last year, I drew a lot of attention from my readers; they stopped to talk, and brought me food, water, and flashlights. I guess that by standing on the street corners, I was easier to find. Even the media coverage was different: local radio and online news sources did interviews, and I was even on TV. But this year, I was much more hidden. Some people blew their horns and waved while I was on my prayer walks, and some stopped and gave me water. A lady on Riverside Drive gave me a tomato as I walked by her produce stand; that was the highlight of my day! And thank you Clarksville Now for coming out and doing a story on me. But generally, it was just me and God.

Being more hidden is probably why I was able to really enter into this assignment as a homeless person. I felt the cold and experienced being wet and being alone—the stuff that can’t really be understood until you’ve lived it. There was a time in 1996 for a couple of months that I had to live in my truck because of a divorce. There are thoughts and feelings that I’ve kept buried that came to the surface while I was out here this time. I remembered the hopelessness that I felt back then… the shame of failure, and feeling like an outcast and a loser. Those are real feelings, and at times during the last two weeks, God has let me feel them again and then write about it so that maybe some of my readers will look at the homeless in a little different light.

Just for the record, not everyone is called to go live on the streets in order to prove that they love the homeless and poor. In fact, don’t do it unless God tells you to—and even then, be safe about it. Last year, there was at least one copycat who decided he was going to do it, but the problem was that he wasn’t very street-savvy, and he hadn’t had much experience with the homeless. It turned out all right, but he took a big risk coming out here like that. 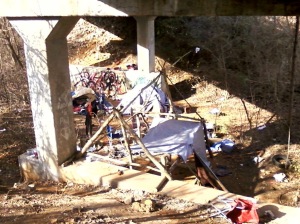 A camp in Clarksville.

One of the questions I get asked a lot is, “Where are the homeless camps?” to which I reply, “I don’t know.” I can tell you areas where there might be camps, but except for just a couple of sites, I really don’t know for certain.

I don’t know because I don’t ask, and this is why: In the early days of Manna Café, we went into Tent City in Nashville once a month to serve a meal and do an outdoor church service, right there at the edge of the camp. There were dozens and dozens of tents and shacks there, under a huge overpass. One Sunday, a van pulled up, and a youth pastor, along with his youth group, piled out—and before I knew what was going on, they took off running throughout the camp like it was a petting zoo… and I saw the horror on the faces of those who lived there.

We have to remember that everything a homeless person owns is either in their backpack our in their camp, if they have one. Their camp is the closest thing to a home that they have. And they are real people, with real feelings, and real stories… just like you and me.

3 thoughts on “My Last Night in the Woods”