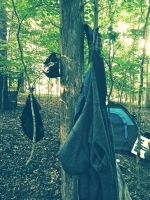 This was my closet for two weeks.

Well, I’ve been back off the streets for two weeks now.

Right after getting off the streets, I joined my amazing team in pulling off our Color Me Cool fundraiser, and then Vicki and I headed off for a week’s vacation to get rested up a bit. Now I’m trying to get back into the flow—but honestly, after those weeks of homelessness, my life is forever changed, and I hope I never get back to “business as usual.”

Through this whole experience, there’s been one question asked more than any other: “What did you miss most from your normal life?” Well, not to burst anyone’s bubble, but even before my two weeks on the streets, my life was anything but normal. But there were a lot of things I missed, and maybe you can relate.

We have lots of birds even in the winter.

Until next time … peace out!